This set of essays explores the ongoing cultural and political connections between Chicana/o and Mexican history. Edited and introduced by Héctor Calderón, The Aztlán Mexican Studies Reader, 1974-2016 presents thirteen previously published essays together with three essays written specifically for this collection, making a rigorous case for the contributions of Chicana/o studies to the transnational study of Mexico.

The first essay, by Tomás Almaguer, which was also the first to be published, sets the stage with a historical overview that relates how the Chicano movement was rooted in the soil of conquest and colonialism in Mexico. Subsequent essays discuss a range of topics that stress interconnections between Chicana/os and Mexicans: transborder issues such as immigration and labor; Chicana/o and Mexican fiction; femicide and racism in Mexico and their reverberations on both sides of the border; and the development of Mexican art forms-including muralism, cinema, and music-in Mexico and the United States.

HÉCTOR CALDERÓN is a professor in the Department of Spanish and Portuguese and the César E. Chávez Department of Chicana and Chicano Studies at the University of California, Los Angeles. His most recent book is Narratives of Greater Mexico. 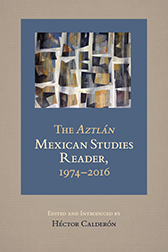